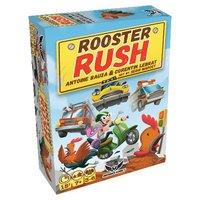 Rooster Rush — first released as Gaijin Dash! — is a party game in which players need to cross multi-lane roadways and avoid oncoming vehicles. Observation, risk-taking, and speed are the three skills you need in order to keep out of the hospital!

Rooster Rush has you and your fellow chickens trying to decide whether to take the chance on crossing a street while traffic whizzes by you, represented by spinning coins. Be quick: there are only a few streets each round, and only one person gets to cross each one.

You can check out the Kickstarter news page for Rooster Rush here for any updates.

Update (March 29, 2018) - Rooster Rush has arrived in store and is now available for purchase!