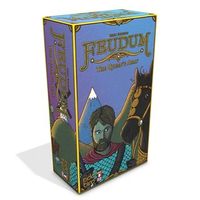 Oh Bollocks! The Queen's tyranny is spreading into every corner of the kingdom. Her foot soldiers scour the countryside to hunt the behemoth―a bewitched creature that was once her husband. Your small band of rebels will need sharp wits and a bit of luck to save the King and reclaim the land's virtue.

The Queen's Army is the highly anticipated solo variant expansion for the game Feudum, allowing you (and others) to play against an A.I. player! The elegantly crafted automa deck was developed in collaboration with J.R. Honeycutt (developer for Tesla vs Edison: Powering Up!) and Brian Neff. The game rewards wise resource management and requires cunning play to keep the queen's army at bay as it tries to thwart your rise to power!

10 copies of this are available for preorder.

You can check out the Kickstarter news page for Feudum: The Queen's Army here for any updates.

Update (August 17, 2018) - Feudum: The Queen's Army has arrived in store and is now available for purchase!