Enter a mythic world of dragons and sorcery!

In Talisman, the classic fantasy adventure board game for two to six players, you’ll embark on a perilous quest for the legendary Crown of Command. You’ll choose the warrior, priest, wizard, or one of eleven other heroes with powers both magical and mighty, and you’ll race your opponents through a perilous realm. Each player rolls a die to determine his movement around the regions of the board, where he encounters dangerous foes and claims powerful rewards, all in preparation for his final climactic test. 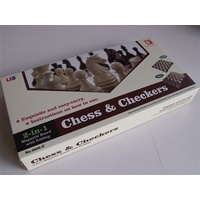