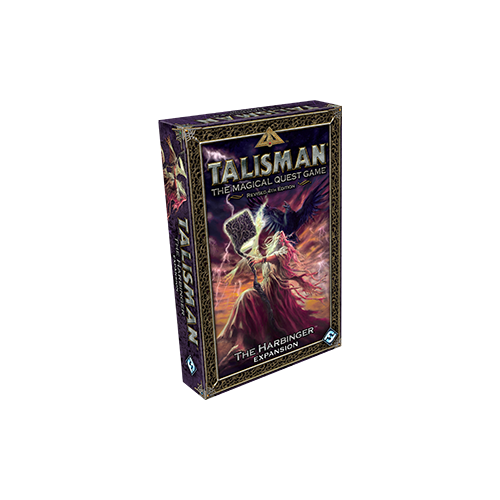 The end of the world is nigh in Talisman: The Harbinger. This expansion introduces the Harbinger, a mysterious figure of prophecy and doom who wanders the realm, with destruction following everywhere he walks. As the demons and plagues of the new Harbinger deck wreak havoc thourought Talisman, three new powerful characters seek the Crown of Command. That quest becomes more dangerous than ever before: cursed followers lie in wait for fresh prey, flames descend from the darkened skies, and the dead crawl from their tombs.

Four new Omen decks reveal the changing and dire effects of impending doom, counting down to its arrival. Terrain cards abruptly transform the ground beneath characters' feet, changing deserts into bogs, or farmland into ruins. You'll have to navigate these obstacles and numerous others if you want to seize victory before time runs out for the entire realm – and the true apocalypse begins.