Embody a god of the Egyptian pantheon and lead your followers to war in Kemet, a game of strategic battles and magical onslaughts for two to five players. You are tasked with claiming as much glory as you can, by raising your empire, conquering temples, and routing enemy armies in battle. In the same vein as Cyclades, Kemet draws the players into the game with a strong atmosphere, thrilling artwork, and dozens of uniquely sculpted figures. To be the greatest of all strategists in Egypt, you must harness strength of arms and the magical forces that flow throughout the land. 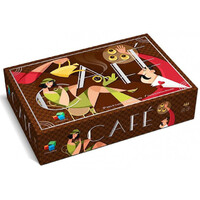