Insert compatible with Dinosaur Island Extreme Edition®. The design provides both efficient storage and improved game play. Many of the trays can be utilised during the game, and they greatly aid set-up and clear-away times. The rules and boards act as a lid on top of the trays.

This same insert also works with the Totally Liquid Extreme Edition® expansion, for which we have created a separate product page. If you own both sets you will need two inserts to store them.

The insert is in two layers just in one corner, you can see in the top right the bottom layer tray. Also note here how the dino recipe tiles are stacked in the other top corner, and that the player and game boards are on top of each other in the bottom of the box.

These are the trays for the dinosaurs and cards, and for the player pieces. The tray for the dinos was made as large as possible to make it easy to store either the regular triceratops pieces, or the full KS selection of species. There is space for all cards to be sleeved. Each player has their own separate tray for their pieces.

The two coin trays can be assembled in one of two ways: either for vertical storage of the metal coins or as a simple box for storing the card coins from the game. Note that if the metal coins are used there is not then another storage space for the card ones, and these would need to be kept elsewhere.

As mentioned above many of the trays can be used during the game to organise the components and make access by all players easy.

For this insert the game boards go on the bottom and the insert trays on top, as noted above. Once all trays are placed inside, next goes the rulebook. After this should go the visitor bag, with the knots from the string tucked into the spaces as shown. Lastly the fast pass wrist band is placed over the string. The box is then fully loaded, and the lid will close flush and the game can be stored vertically.

This insert works equally well in the Totally Liquid Extreme Edition® expansion. Please click on the image to see the detailed product page for the insert in this expansion. 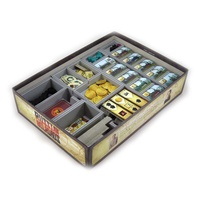 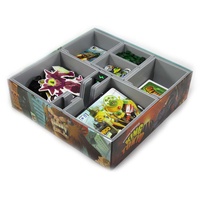 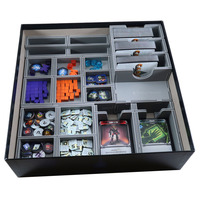