The village of Azer has existed on the surface long before New Gravehold was founded, and the mages there are experts at fighting in close partnerships. Now, a creature composed of flame threatens to bring down the forest around them, and the only ones who stand in its way are a boy who lost his partner in battle, and a girl who had to grow up without one. Southern Village is an expansion for the cooperative deck-building game Aeon’s End. 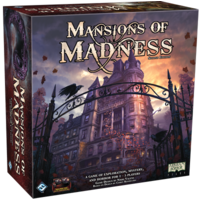